24-year-old Savannah Mikell is the manager to one of Instagram’s most unexpected new influencers.

Each photoshoot is carefully designed, lit, and planned by Mikell as her subject goes about his day, his 50 thousand followers waiting on an update. Then, when everything is in order, Mikell heads out the back door and scoops her model up from the garden.

Even before his new-found Instagram fame, Toby Toad was living large. He has his own fully-furnished home: a dollhouse given to Mikell when she was a child by her aunt, a professional miniaturist who made the house by hand over a decade ago.

Made with a 1:12 ratio (which Mikell tells us is very important in the world of miniatures), the tiny toad house is complete with carpeting, crown moulding, tiling, and even electricity. All the lights and ceiling fans actually work. 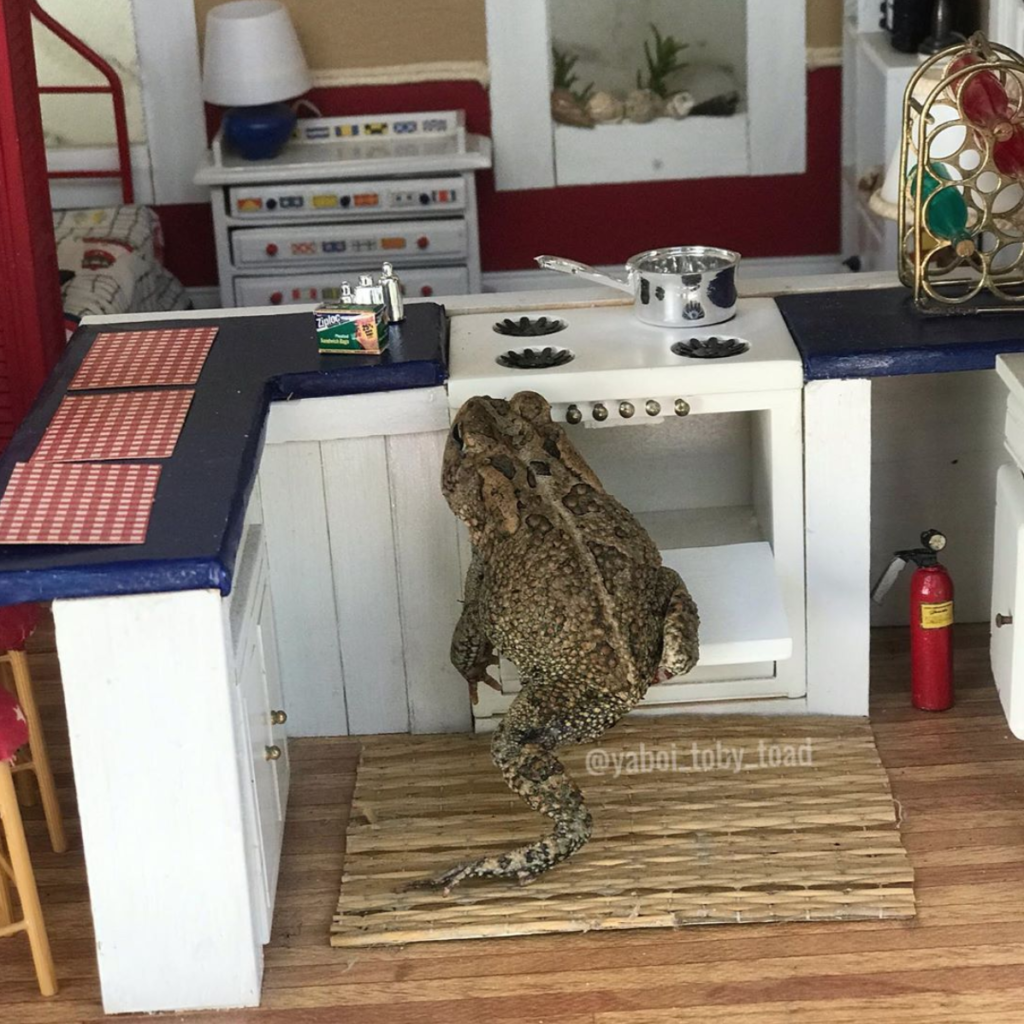 But Toby Toad’s Instagram account is more than just a collection of visually-pleasing photos of Toby’s day-to-day activities: it is a community of positive energy. Toby Toad is very responsive to his tens of thousands of fans—it isn’t unheard of for Toby to wish one of his followers good luck on a test for school, or well wishes for an upcoming business trip. 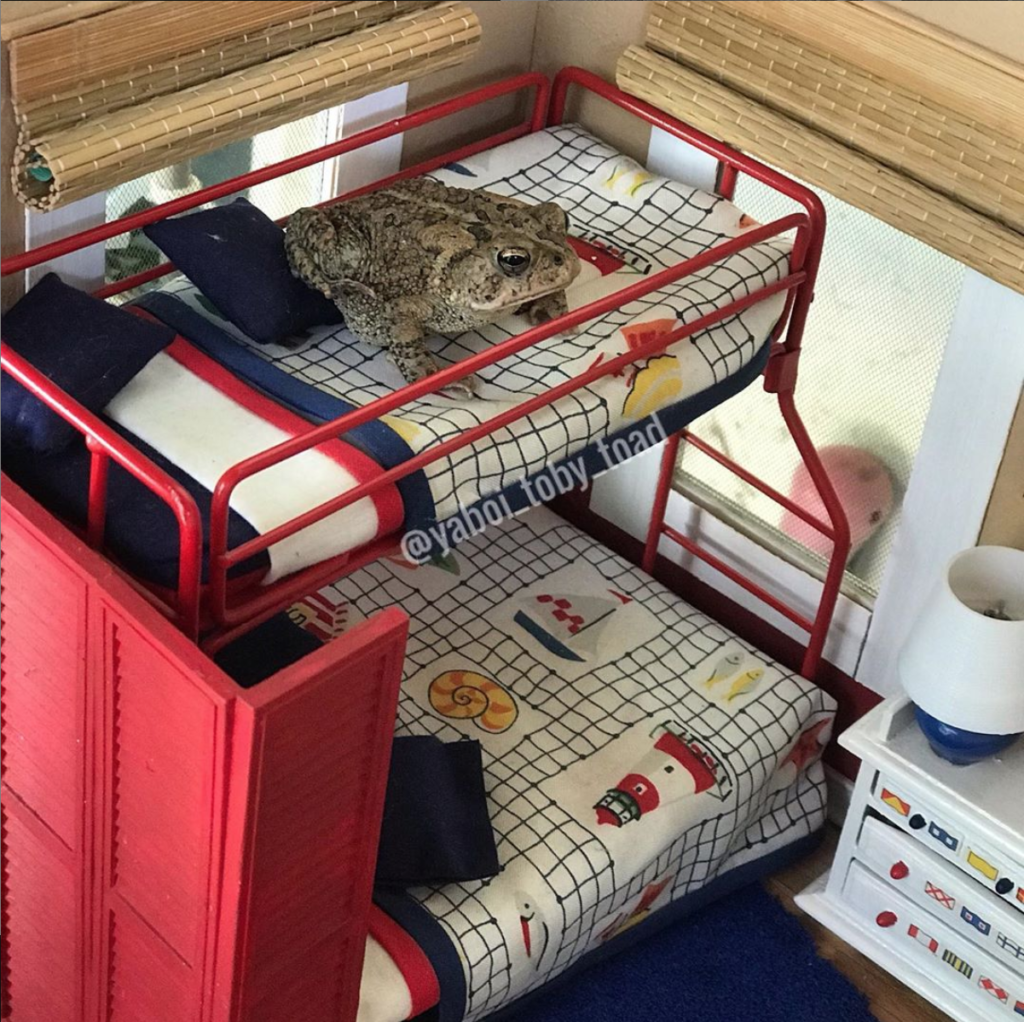 Toby was recently signed to The Dog Agency, a top talent agency for animal actors and influencers. The first amphibian on the roster, Toby has a possible opportunity in Los Angeles coming up, and plans for merch, including a calendar complete with seasonal photos. 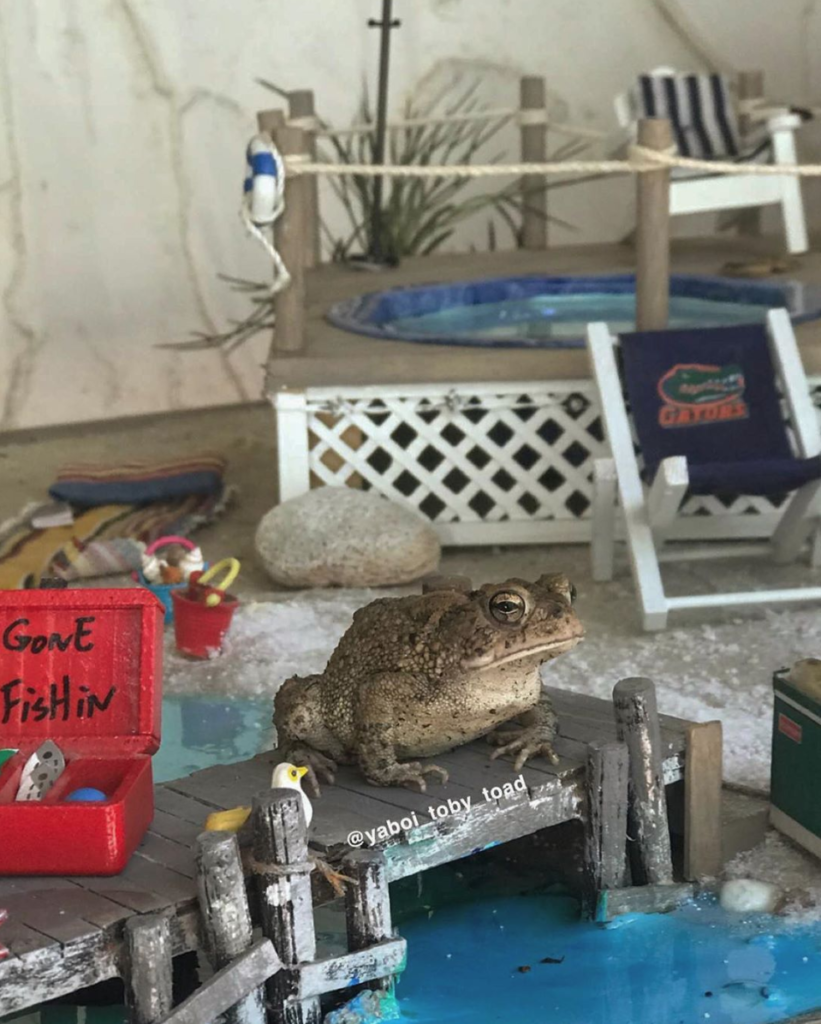 For now, though, Mikell works as a bartender at Texas Roadhouse, where she says all of her regulars know about her famous toad.

Listen in on our phone conversation with Mikell, in which she discusses her process for photographing Toby, her goals for him as an influencer, and how she knows for sure her free-roam friend really is the same toad every time. 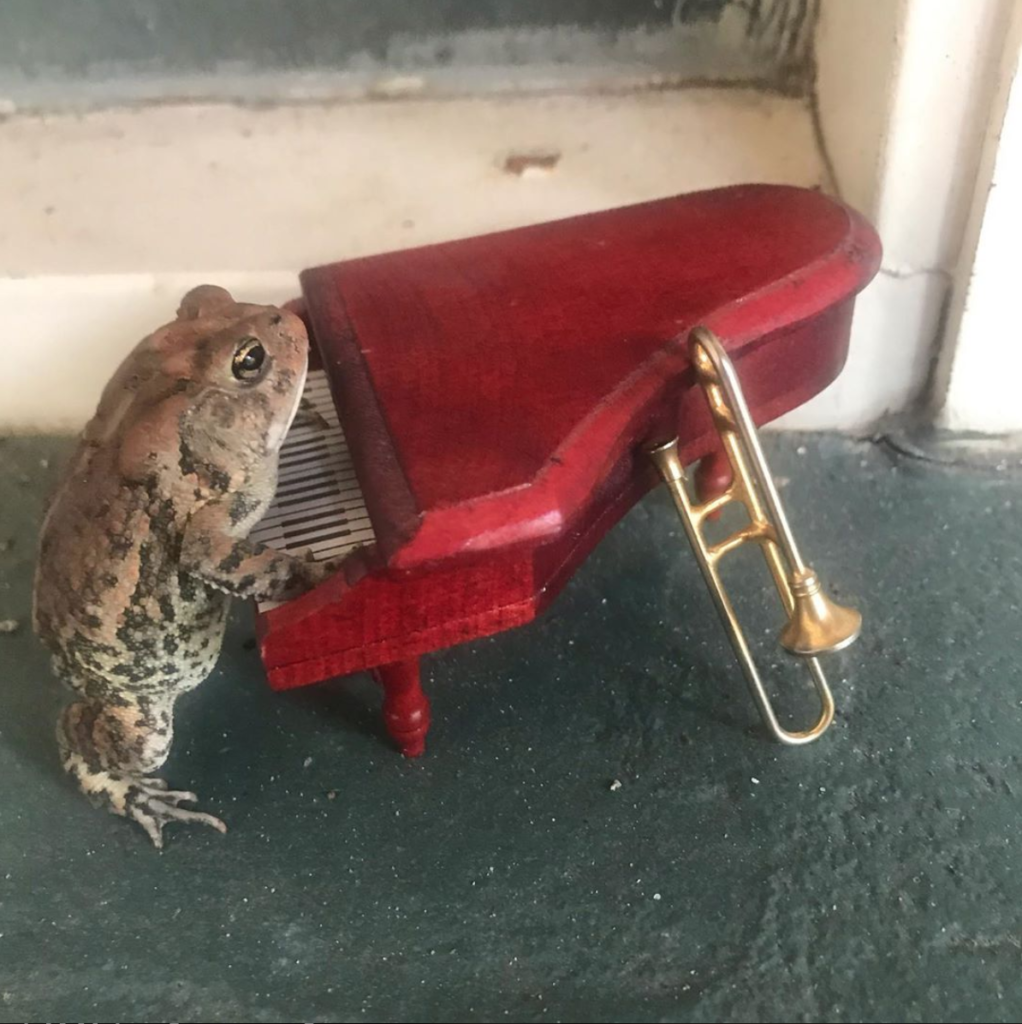 Hannah Loesch: We’ve seen you talk about how social media can be so toxic, and how what’s special about Toby’s account is that he’s an influencer that can only make people feel good, because he’s a toad and there are no comparisons! Can you tell us more about your thinking behind this? 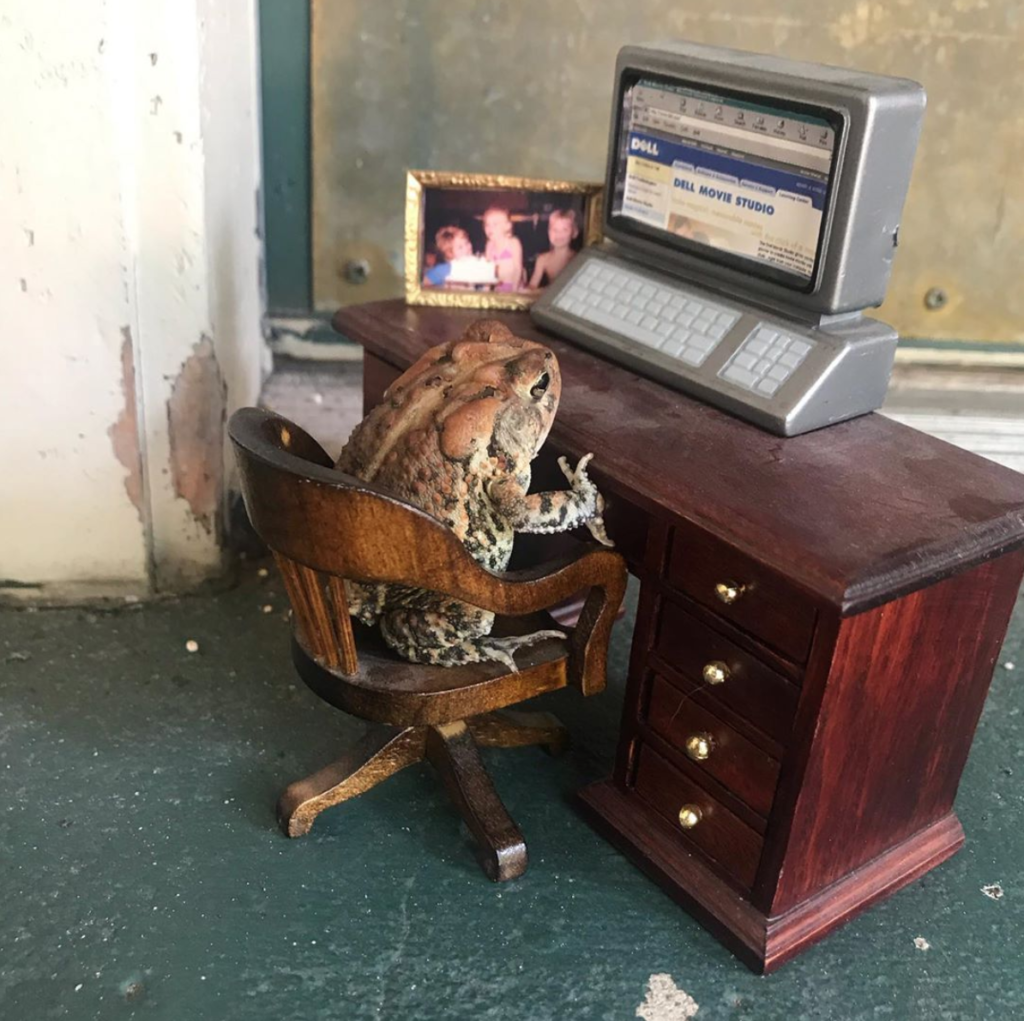 Savannah Mikell: Yeah. I’m 24, and I’ve been on Instagram for like six or seven years now. I’ve noticed myself...I’m generally a confident person, but when I’m scrolling through the Discovery page on Instagram, I’ve noticed that I see a lot of pictures of really, really beautiful women, and I’m happy for them, but then I find myself thinking, Oh my gosh, I don’t look like that, I wish I looked like that. I wish I had that money, I wish I was traveling as much as they are. They seem to have a better quality of life than me. 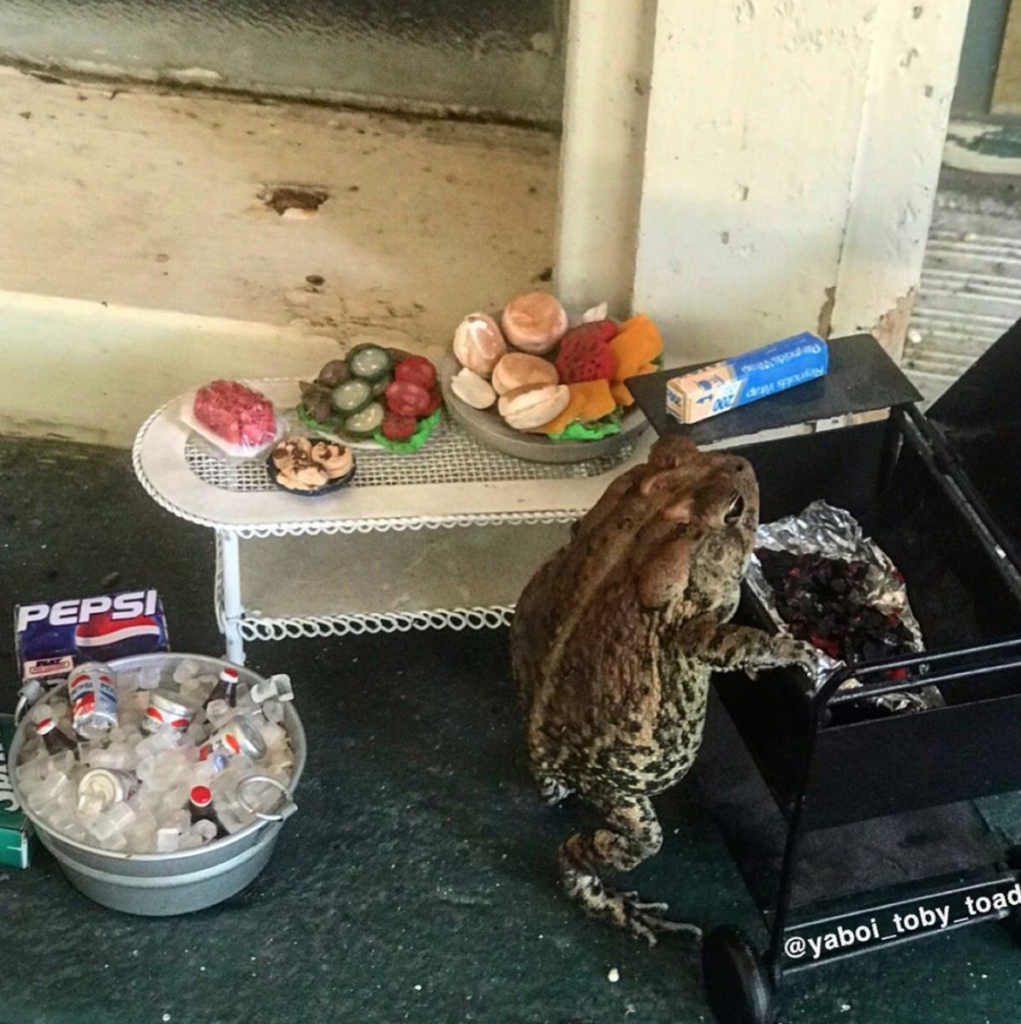 And it makes me question where I’m at in life. Like, am I doing well? What am I doing wrong? Why don’t I have their life? And then you have to kind of step back and think…We tend to post the best parts of our lives. We don’t always post the in between, we don’t post pictures of us crying because our school work is really hard, or too much, or the jobs we worked in between careers and things like that. We tend to put the best parts out there, and sometimes the best parts that we put out there aren’t really an accurate depiction of what we’re actually doing in our lives. 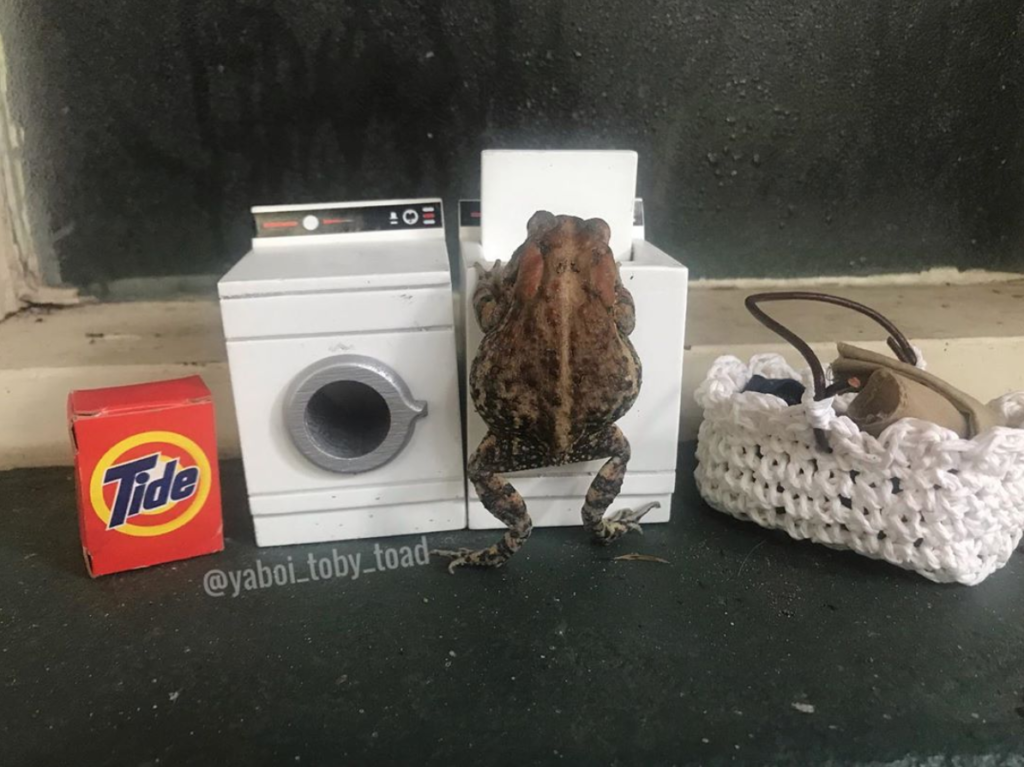 And I just think that’s a huge trend, I think especially for younger ladies high school age or even middle school now, they’re all on social media. And that’s how they’re being influenced as they grow into adults. So I feel like the Toby account is for all age groups, all genders, and it reaches any audience. [Anybody] can appreciate him, and there’s no factor about it that would make you compare yourself and think, Oh, I’m not doing that well, I’m not doing as good as that person. It’s just fun, lighthearted, wholesome. 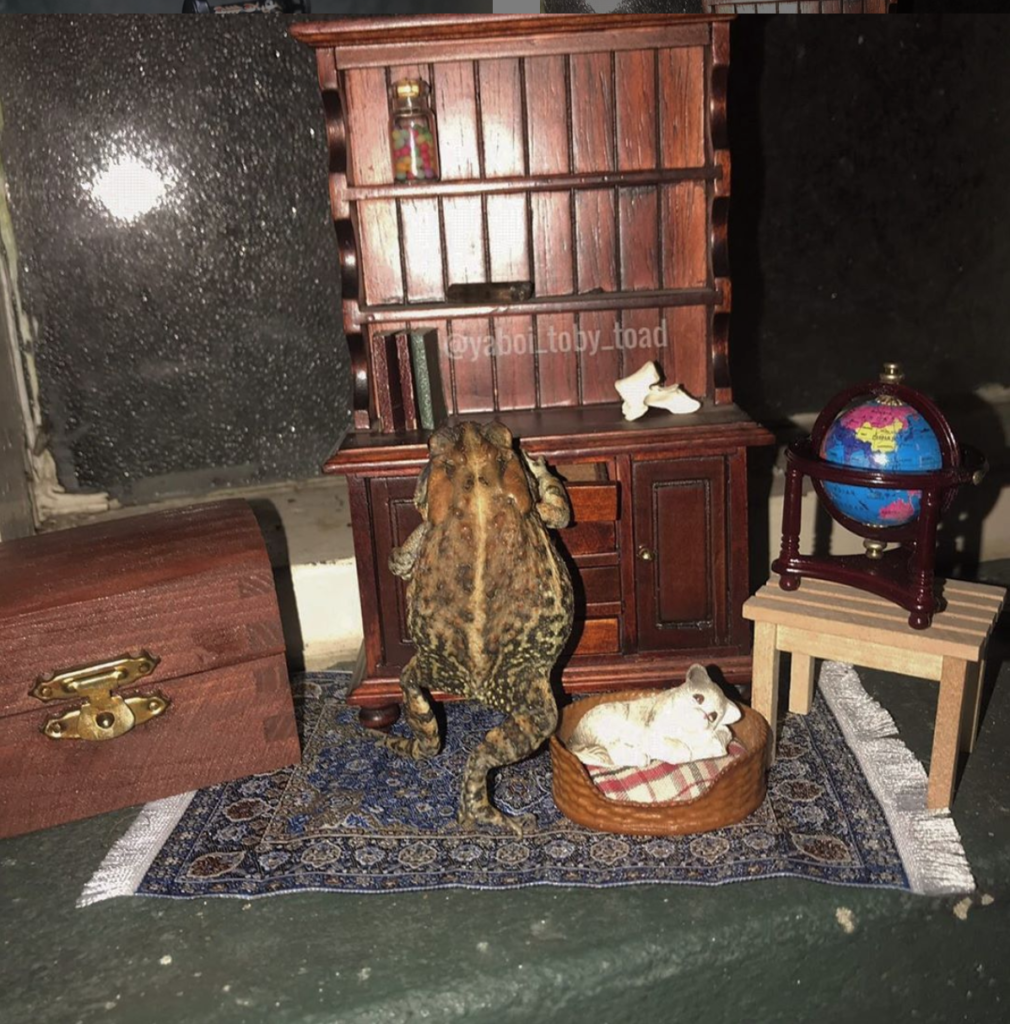 Cailin Loesch: I agree with everything you’re saying, and what I love about the page is that it’s not just Toby posting about his life, it’s really like a community, like a really positive community. As Toby’s human mastermind, you’ve given him a unique personality...sometimes I can’t decide what’s funnier, the photos, or his captions and replies to comments! If Toby was a person, what kind of guy would he be? 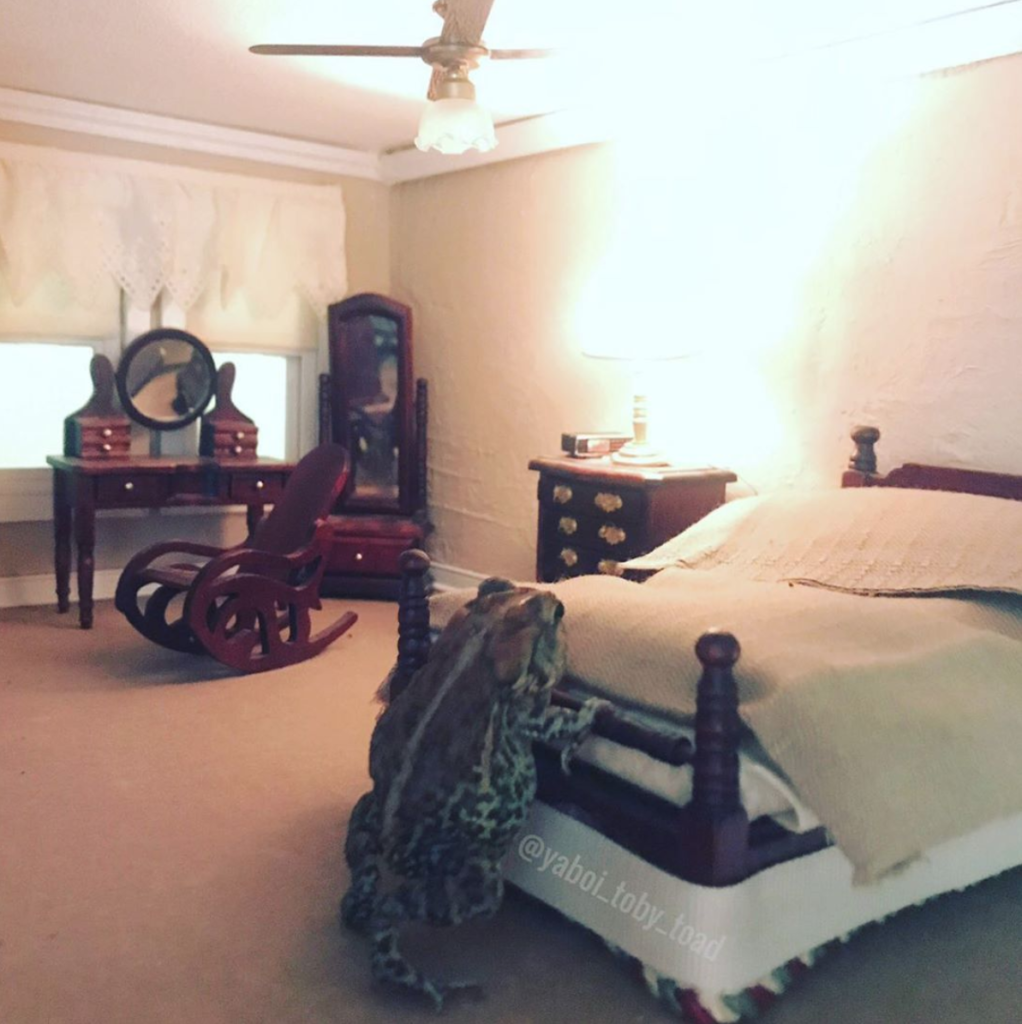 Savannah: Oh, gosh! [laughs] I think he’d be kinda one that just kinda goes about his business, but is friends with everybody. He wants to have everybody over, he’s a good host. So I think he’s just kind of a good social person that minds his business. 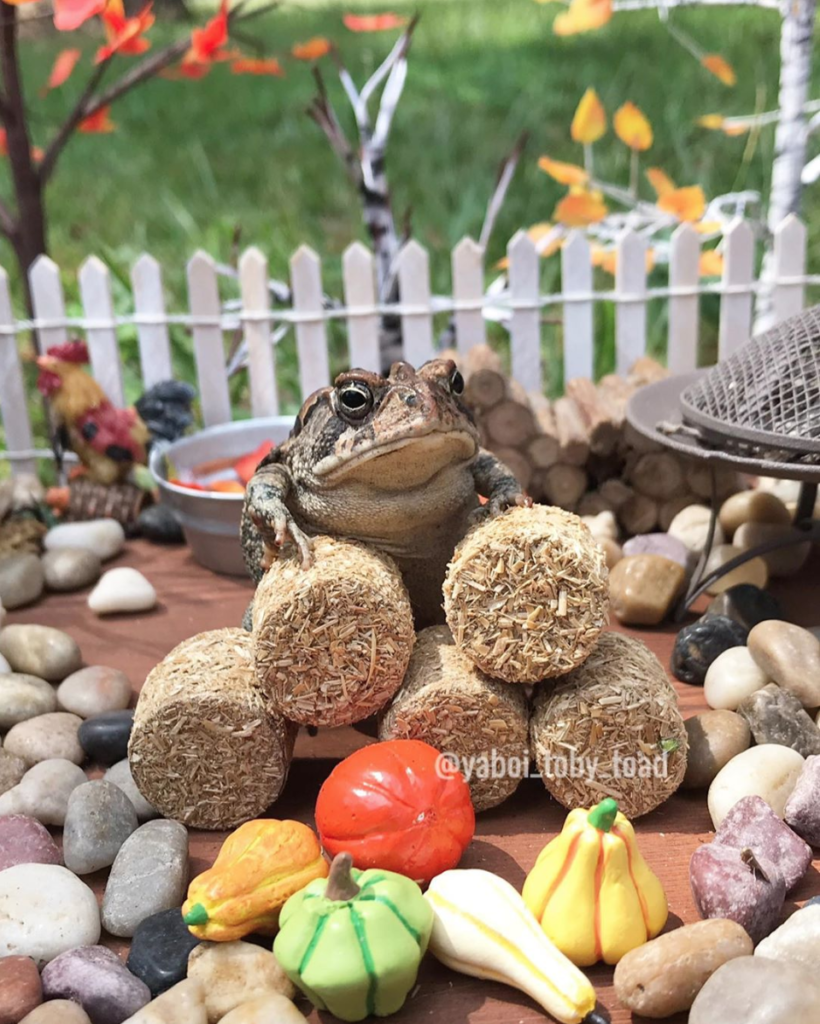 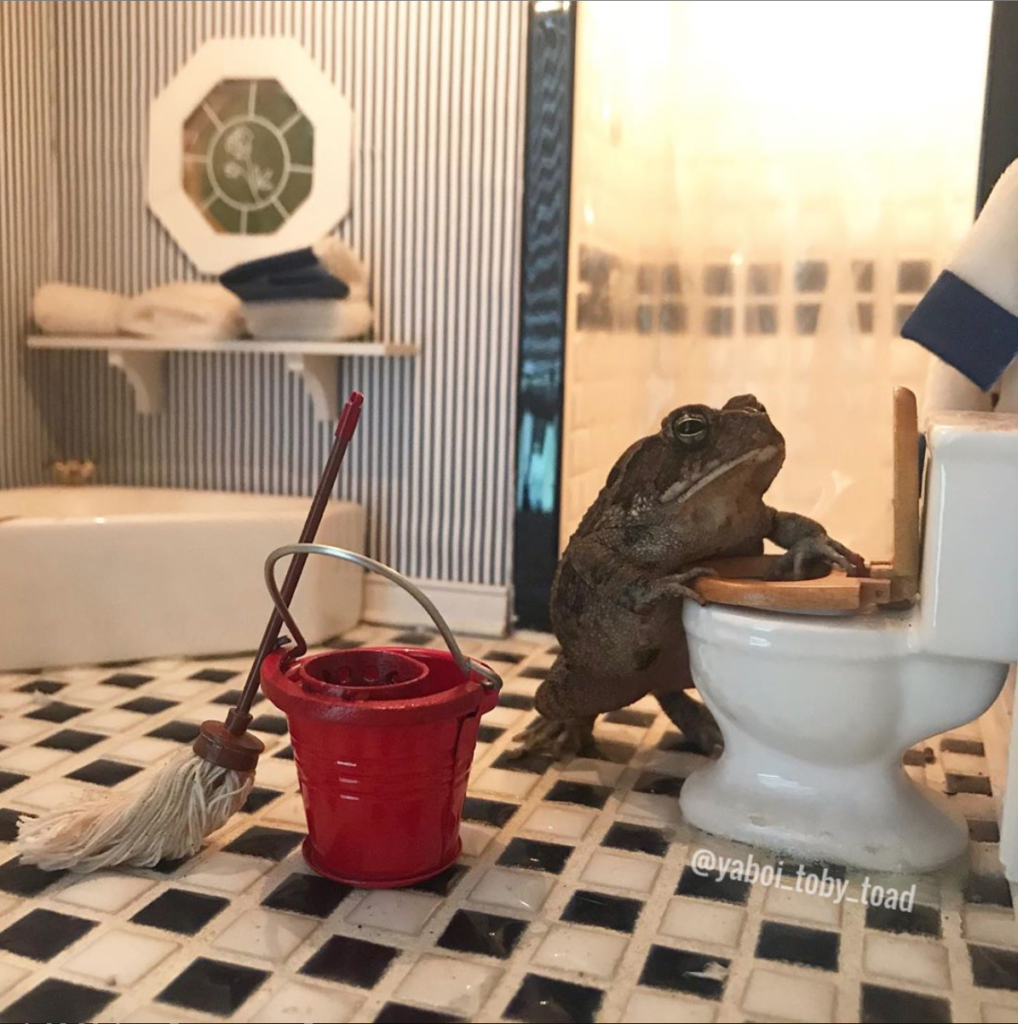 Savannah: I actually have a walled-in courtyard off my front porch. It’s kind of hard to explain without showing you a picture of it, but it’s walled-in and you really can’t get out. I know what he looks like ‘cause he hangs out in the same little area. Toads burrow and make little caves, basically, and stay in it, and I know where his is. Most of the time he comes through the windowsill. 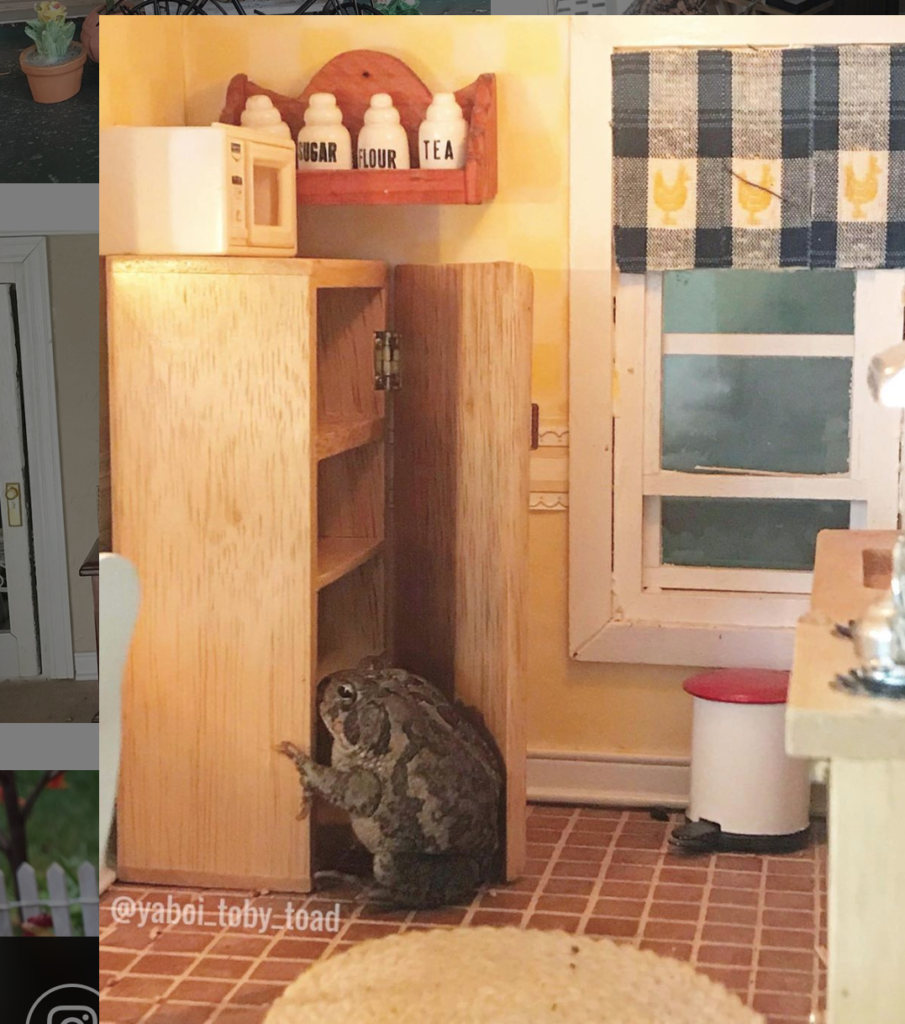 And I just know what his spots and stuff look like. The kind of weird thing about toads is that they kind of contain they’re color a little bit based on how full they are [laughs]. If he’s really full, he’ll stretch, and he seems kind of lighter then. Sometimes, too, I find him sitting in his...I made him like a little tiny pond, and if he’s wet, he’s lighter-colored because he’s clean.

Cailin: Can you describe your process for photographing Toby? 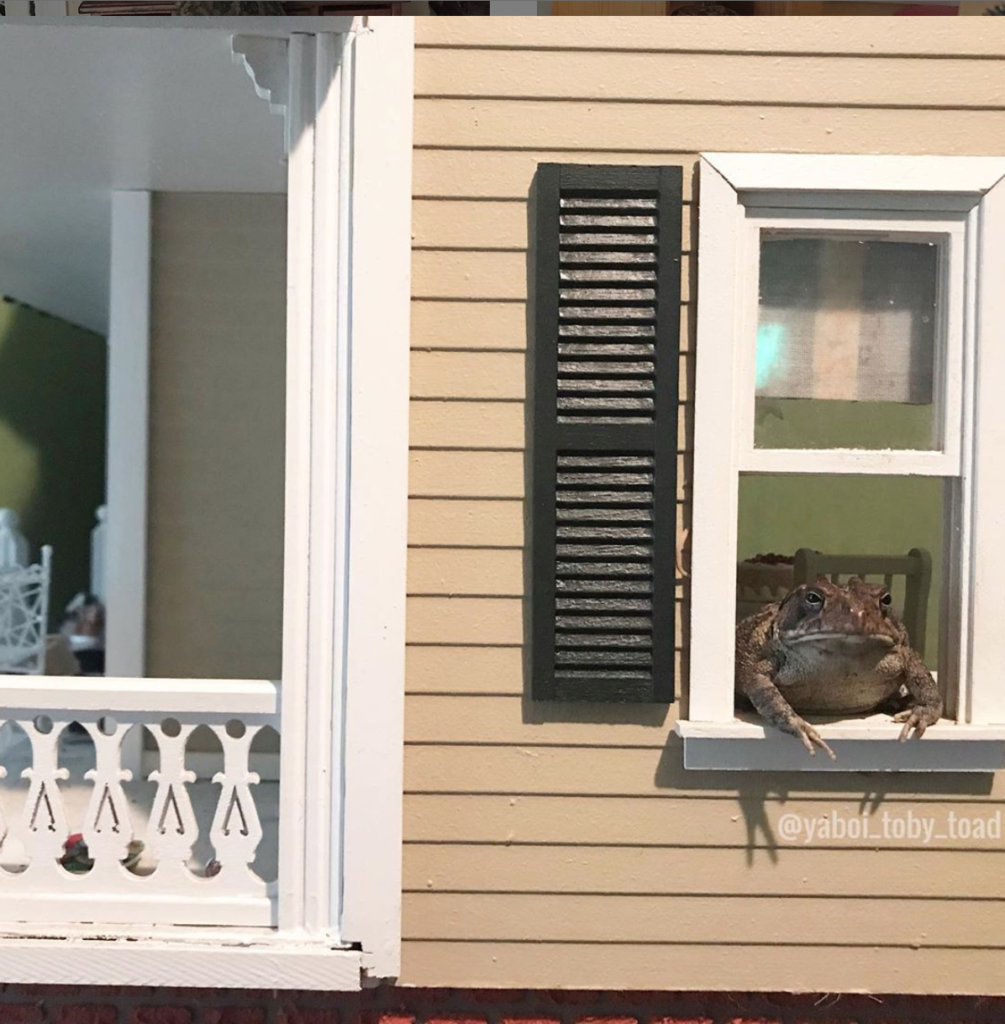 Savannah: When I take pictures of him, I set up the scene, and I get my angle ready, and my lighting. And then I get him and pose him and take the picture. I’m only really posing him for maybe two or three minutes. It’s not like I’m sitting there, like, holding him hostage for thirty minutes. And he seems to enjoy it. He eats a lot of bugs. 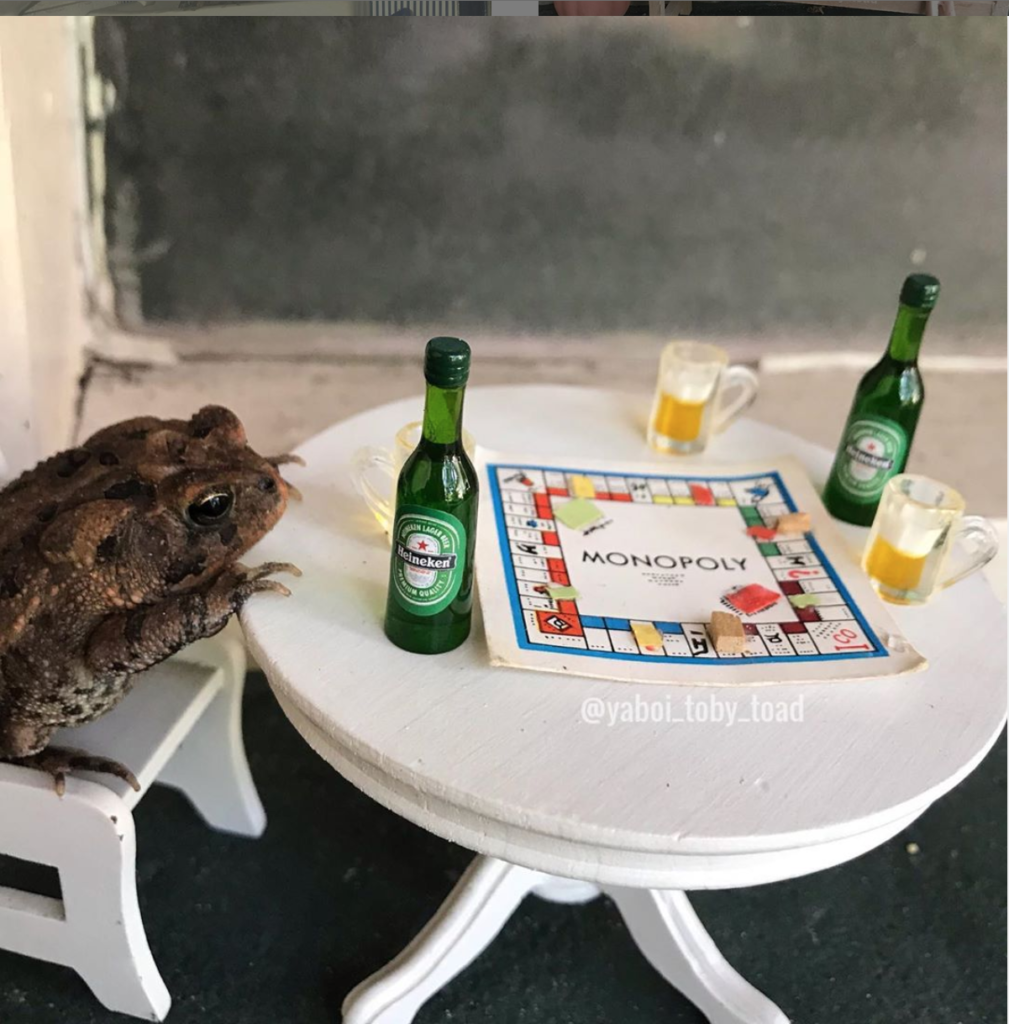 You can keep up with Toby Toad's adventures on Instagram @yaboi_toby_toad.