"It wasn’t at all how you would imagine a great white shark. It’s not like Jaws where the shark is breaching out of the ocean and belly flopping, and, like, ripping animals. It was a very serene moment."

For two weeks during the summer, people all over the country spend their dog days not at the pool or beach, but glued to their TVs. It's not the summer Olympics or the America's Got Talent finals: it's Shark Week (or for Nat Geo Wild fans, SharkFest), and for some, it's the only time all year National Geographic or Discovery is the go-to channel. But what is it about sharks that keeps us tuning in year after year?

Kimberly Jeffries has a theory. Based on Oahu, Hawaii, Jeffries is known for her nature and wildlife photography, most notably her haunting shots of marine life ranging from sea horses to sharks. Her January 2019 encounter with Deep Blue, the famous great white who is widely agreed upon to be the largest ever recorded on film, will be detailed in the encore airing of World's Biggest Great White? on August 2nd, during Nat Geo Wild's SharkFest. We spoke with Kimberly by phone ahead of the special and discussed her career's origin story, her experience diving with the world's biggest recorded great white, and why people are so fascinated with sharks.

Hannah Loesch: Where did you develop your interest in underwater photography? Was this something you grew up wanting to do?

Kimberly Jeffries: For the most part I grew up pretty land-locked. Even though I was by the water, I grew up in New York City. But I’d always had family out in Hawaii. Because my mom was a single mother, come vacation time she’d send me to stay with family. So I grew up snorkeling here in Hawaii, and kind of bouncing back and forth between the two places. I eventually moved out here kind of full-time a little over a decade ago. And I was surfing, but I really wanted to see what was underwater. So I started progressing through dive certification and training. I found it to be really therapeutic and beautiful. It’s this place where so few people really go. I think people don’t realize how few people actually have access to the ocean, or ever get the chance to go on vacation somewhere and be with underwater [life]. After I reached a professional level, I ended up doing some side work for a movie called Chasing Coral. They actually allowed me to push my first camera underwater, and do a lot of the film-related stuff. And I found that I really kind of fell in love with it. And then I realized as divers, we’re sort of ambassadors for the ocean. We’re seeing a place that no one else really gets to see, so it’s our responsibility and our duty to share about it. And in my case, I like to take pictures and show them to people to help them fall in love with the ocean.

Cailin Loesch: For a lot of people, Shark Week is the only part of the year they religiously watch Discovery, and SharkFest is the only time they are glued to National Geographic. Why do you think so many of us have this fascination with sharks?

Kimberly: I think it’s kind of a primal thing. You know, humans aren’t really built to tolerate extremes. We can push our bodies really far, but when it comes down to it sharks live in this world that we’re completely unfamiliar with. It’s a hostile environment for us. And on top of that, sharks, when they do investigate us, tend to do it sort of fatally. Because they don’t have hands to investigate with. So kind of like a dog comes up to you and checks you out with its mouth. I think because of that, we’ve got such a negative history with sharks. So the stories get passed around.

Cailin: As someone who has spent so much time in the ocean, with underwater creatures of all kinds, what do you think is the biggest misconception about sharks?

Kimberly: I think everyone thinks that they’re swimming around at the beach trying to get you, and looking for people to bite into. But that’s just simply not the case. They’re usually swimming around trying to conserve energy. That’s what wildlife is about: eating and conserving energy to survive 'til your next meal. Sharks are actually harder to find in the ocean than people think. When you see how many people are in the ocean versus how many shark attacks actually occur, the numbers are really, really statistically low. Sharks are really threatened now due to overfishing. We’ve actually seen populations decrease over the years.

Cailin: So really, they should be more afraid of us than we are of them.

Hannah: I like how you mentioned that sharks are actually kind of hard to come by, because I was wondering your process for capturing sharks on camera. Are your dives planned down to a science, or is a lot of luck involved? Like, when you dive down, do you know you’re going to encounter Deep Blue?

Kimberly: So we went out to survey a different season of shark that day. We were looking for Tiger Sharks, and we did sort of joke about how amazing it would be if something bigger showed up. But we didn’t take ourselves very seriously [laughs]. Which I think is healthy anyway [all laugh]. But a lot of our dives are planned. We target specific areas to survey the sharks and document them. And, you know, sharks hang out in different spots and regions. Some of it’s down to luck. Deep Blue being at the sperm whale was absolutely down to luck. Having a white shark at all was an amazing opportunity, let alone three giant females. That’s just absolute luck and a little bit of science thrown in after to explain things. But most of it is all planned.

Cailin: Was it a moment where you knew it was Deep Blue the second you saw her? How do you confirm something like that?

Kimberly: In the moment I didn’t know who she was. I think if I had been a little bit more up-to-date on things, maybe. I had heard the legends about Deep Blue, so when I took the pictures home and shared it with the scientists and the researchers, and they came back to me with the identification. And I was like, ‘Yeah, whatever, you’re crazy.’ That was just completely preposterous to me. Not only had we seen a great white, but we had seen the biggest one ever filmed, years later after people had already been searching for her. She’s like a public figure. That was really crazy to me. It still is … And then we got to identify another one. That is one of the really exciting things to me. Right? So we’ve ID’d these sharks, and they had never been seen before.So what next? Is someone gonna see them next season? The white shark season is coming up in a couple months, two months from now in Mexico. So I hope someone sees her. We’re connecting some major scientific dots, down to times, which is huge. So much is still unknown about these sharks, and we can find out so much, and that leads to protection.

Cailin: For those of us who have never been diving at all, much less alongside such a massive creature, put us in that moment where you are in the water with a shark as big as Deep Blue. What’s going through your mind?

Kimberly: [laughs] In that moment, I was like, ‘Oh, I have to get proof, I have to get identification shots, and I have to be very thorough. It can’t be about art right now, it just has to be straight identification. It wasn’t at all how you would imagine a great white shark. It’s not like Jaws where the shark is breaching out of the ocean and belly flopping, and, like, ripping animals. It was a very serene moment. She was slow, she moved very deliberately. We could easily out swim her. And she didn’t show much interest in us at all. Mostly ‘cause there was such a good food source. White sharks of that size and age, they really need to conserve their energy. It takes so much to actually move them through the water. So I think she recognized that we’re just curious, we mean no harm, and she’s just eating too. It wasn’t scary.

Hannah: How do you make sure you stay safe? Most people imagine divers staying in a cage around sharks, but that wasn’t the case for you. I’d imagine a shark’s behavior is kind of unpredictable, right?

Kimberly: Right. It’s unpredictable, but there are some warning signs. It’s a lot like a cat. They’ll arch their back, they’ll point their fins down… cats don't have fins, but just pretend with me.

Hannah: I get the visual. 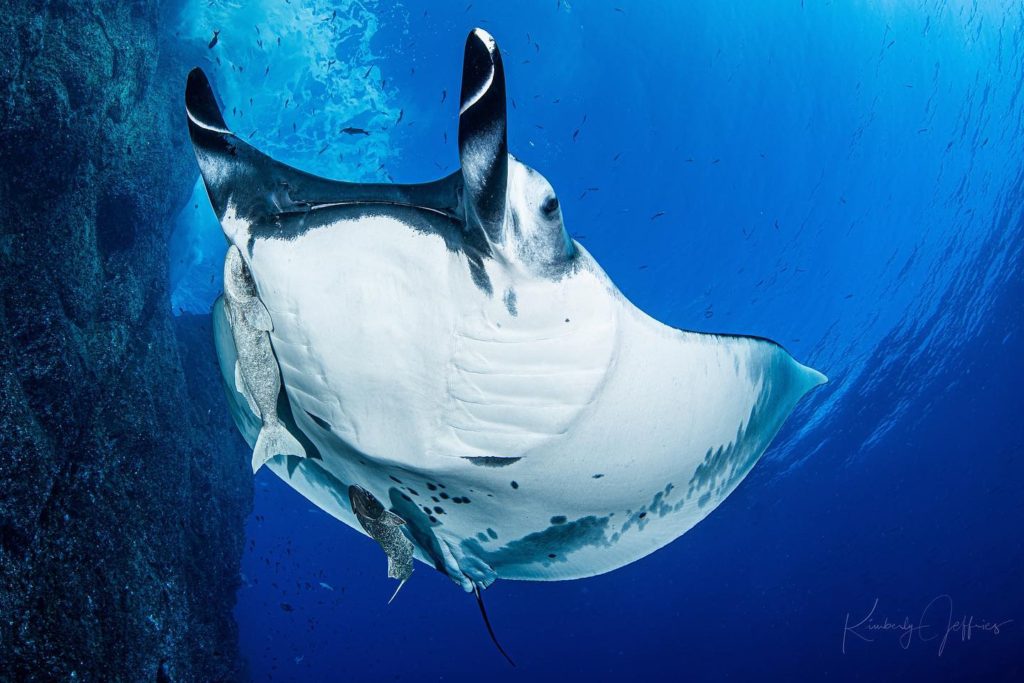 Kimberly: They kind of do that. They’ll bear their teeth and do this jaw flexing thing. Obviously I’m in the water with someone else, and we have a boat nearby with a captain on board at all times. So they’re looking out for us. [We’re in] constant communication. She didn’t display any of those signs, so we felt pretty safe.

Cailin: When you’re photographing different sharks, do you notice different personalities like you would with a dog or cat?

Kimberly: Absolutely. Yeah, different sharks have different personalities. They've all had unique and similar experiences. You’ll notice that sharks that have been hooked before, or kind of interacted with humans before, will be a little bit wary. It’s not illegal to fish for sharks in Hawaii, or most of the U.S., which is really unfortunate. So we do find a lot of sharks with hooks, trailing lines, possibly life-debilitating injuries for them. So they do have different personalities, just like us. Some of them are prickly and some of them are…I wouldn’t say friendly, but curious.

Hannah: How would summarize World’s Biggest Great White? for people who haven’t seen it yet?

Kimberly: It’s really special. It’s not your typical shark documentary. If you wanted blood and guts, this is not what you should be watching. This is a scientific documentary. There’s a lot of culture and history thrown in. There’s a lot of respect paid to the sharks. And all of it’s real. It’s us filming our show from behind the scenes and then they put it together. It’s totally different. People who have seen it have said that it’s completely changed what they think shark shows should be about, which I think is true. It’s focusing more on how beautiful the interaction was than how traumatic it can possibly be.