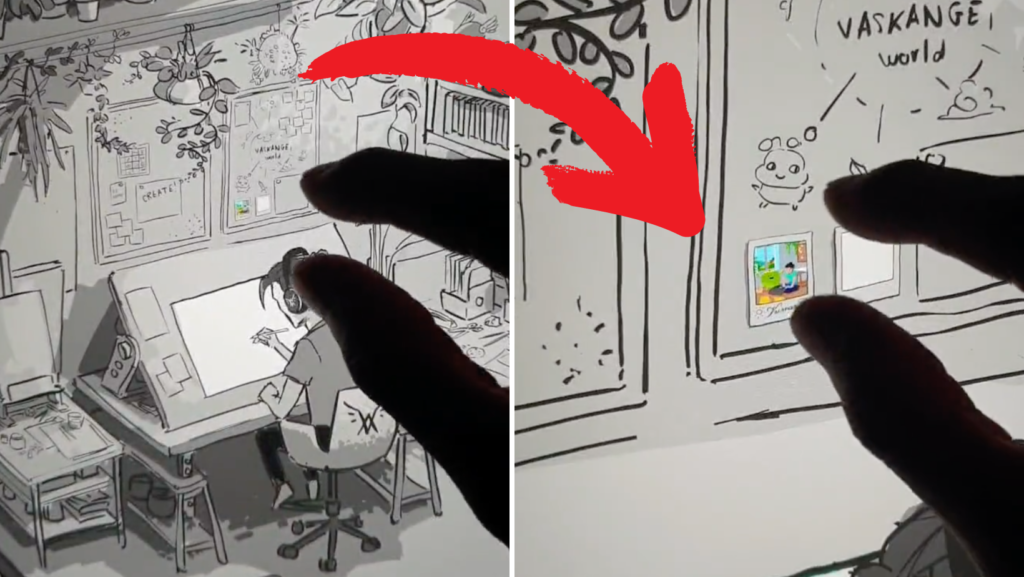 “This is the coolest thing I think I’ve ever seen,” one user wrote.
“It’s like real life, only better,” another chimed in.

The post’s allure motivated more than a quarter of a million people to hit the little red heart, which sent it to the feeds of millions more. Add to that re-shares on other pages, and the “visual Russian doll,” as one user called it, was making waves all over social media.

While watching the clip, the viewer is first introduced to a screen with a black-and-white illustration of an artist sitting at their desk in a cluttered studio. Then, Vaskange, a real person in the physical world, takes his thumb and pointer finger to the screen and begins to pinch on one of the only parts of the image in color: a small polaroid of a man sitting on the floor, rummaging through a suitcase as a giant anthropomorphic green apple and dog stares and smiles. Vaskange keeps zooming, revealing a blue train in the distance of the polaroid image, which was on the wall in the background of the initial image of the artist sitting at a desk in his studio. From there, Vaskange continues to zoom and zoom. The worlds continue to open up.

In an email from nearly four-thousand miles away, Vaskange explains to us that though his work is bringing millions of new eyes to this type of digital illustration, which he calls “infinite” stories, he has an inspiration of his own — Ogarno, who, on his official website, introduces his “Infinite Gallery,” the first of its kind.

As spectators who know very little about the technicalities of digital illustrations, we have burning questions that only an artist who knows his craft inside and out can answer in layperson’s terms. But we have other curiosities, too. What goes on in the mind of someone who can create seemingly never-ending worlds on his iPad? What is his source of ingenuity? For those answers, we went right to the source.

Cailin: What programs do you use to create your “infinite” illustrations? What does your process look like, and how long does each work of art take?

Vaskange: I use Endlesspaper on my iPad. To make a story, I first draw a storyboard on paper. I imagine each drawing and each transition. Then I start drawing the first illustration, then I zoom to draw the second, and so on. I don’t know precisely how much time it takes because, I draw in my free time and I do not count the hours. I would say it took about ten days to finish my holiday story (which is composed of ten drawings). That’s about one day per illustration — but sometimes more, because I just love to add details even if nobody can see it in the video!

I just finished the storyboard of the next story. It will be a completely fictional story this time. But it will be long to draw it… ✍ pic.twitter.com/EfaiyspAC4

Cailin: Can you give some examples of these Easter eggs?

Vaskange: [In the video that went viral on Upworthy] I drew other people inside the train. I also drew an entire village on the island. And just above the aquatic part that’s shown at the end, I drew a lot of fish and corals that we cannot see because the video is too fast. I even drew the apple in the last scene, inside the left light hole. You can barely see it at 1:03.

Hannah: How did you pick up your skills as an artist? Who or what taught you?

Vaskange: I have been drawing since I was a kid. I started by drawing humorous comic strips. Then I drew three complete comics, about 50 pages each, between the ages of 14 to 17. They were drawn on paper in just black and white, and told the story of humanoid animals fighting to protect their city. There was a lot of humor and fights — I was inspired by all the manga I was reading at the time, like One Piece and Naruto. Then in 2018, I started to learn how to make digital paintings with color. I learned by analyzing other artist’s work, viewing YouTube videos, and taking online courses (by Nathan Fowkes, for example.) But overall, I’m mostly self-taught.

Hannah: I’ve seen a lot of people with the same question: why don’t the images get pixelated with zooming like most photos or digital drawings do?

Vaskange: This is thanks to the application I use, Endlesspaper. The app behaves like an infinite canvas. You can draw and zoom everywhere and you have no limit. People think that it is possible thanks to the use of vectors, which means that illustrations are not made up of pixels. But this is just one part of the answer, because even in other software that use vectors, you have a zoom limit. Endlesspaper is the only app that allows you to zoom infinitely.

Cailin: You call these infinite illustrations “stories,” which I love. Is there a central theme or takeaway you want people to take away from your art?

Vaskange: I have a lot of different stories in mind — about my life, but also about fictional universes. But above all, with this artwork I would like to transmit my passion for drawing. I would like to inspire people and to show them that creativity and imagination has no limit.

Hannah: What, in general, inspires you in life?

Vaskange: I am inspired a lot by nature. When I travel, I like to take notes, draw sketches, and take photo references. I also take inspiration from my own life — my childhood, certain moments from my past, and feelings and reflections I have about me, people around me, and society. I try to write my thoughts in a notebook regularly.

Hannah: Do you ever get frustrated or exhausted while working? How do you refresh yourself?

Vaskange: Sometimes. Especially when I work on big projects that take me several days or weeks. Sometimes I am frustrated because I would like to produce more artworks, or I get bored of the one that I started. I try to work in sessions of about two hours and then take time to rest, work out, or walk my dog.

Cailin: How did it feel to see your work go viral for the first time?

Vaskange: It was crazy and a bit unreal. I was completely overwhelmed. I was glad that my art reached so many people. But I tried to keep myself focused on my art and to not get too distracted by it.
Cailin: What are your goals as an artist? What is your dream?

Vaskange: My first goal is to live from my art (yes, it may seem odd, but it is not the case yet). Then I would like to create artwork that inspires people.

Hannah: What advice would you give to other digital artists?

Vaskange: Try to listen to yourself, to understand what really matters to you. Keep improving your skills and guide your work in that direction. Don’t rush and have fun on the way.