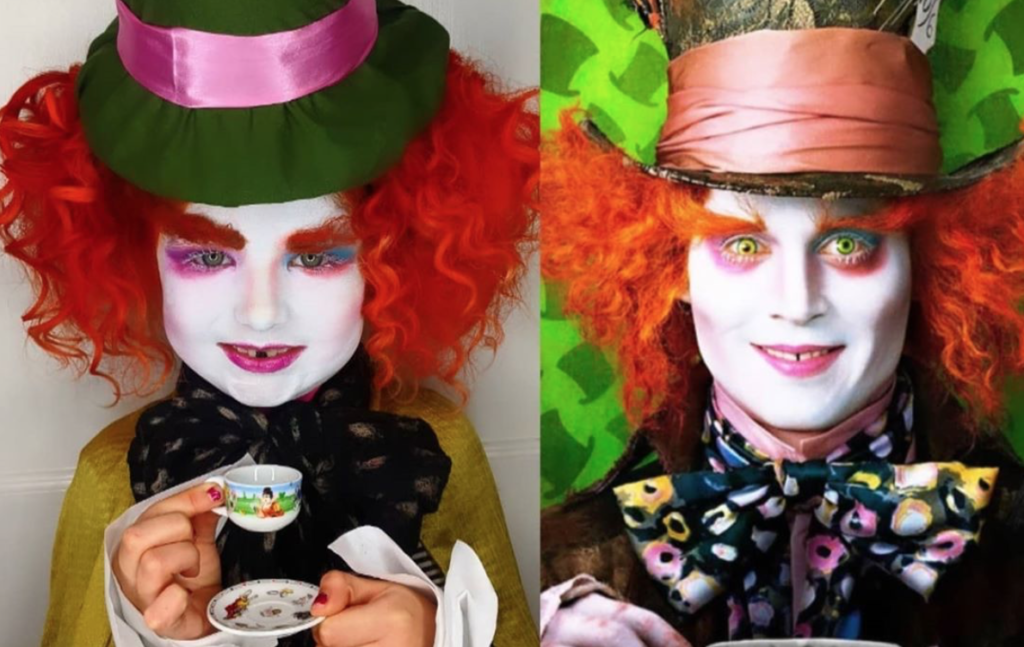 On any given day in October of this year, you could find hair and makeup artist Michelle Scrivner and her two daughters, Lily, 11, and Ellie, 6, gathered in their Minneapolis living room — laughing as they watched one of the girls look less and less like Lily or Ellie, and more like, let’s say, Edward Scissorhands or Spock.


There’s no denying that for many American families, Halloween looked different this year from years past. Many traded trick-or-treating for nights in, and large costume parties were replaced with smaller family gatherings. But the Scrivner family celebrated all month long: Michelle putting her beauty expertise to use to transform her two daughters into iconic performers and characters, before snapping a photo and sharing the result with her quickly-growing community on social media.

“We actually came up with a list two weeks before October began,” says Michelle. “I had a lot of iconic, pop culture looks in mind. I definitely wanted input from the girls so it was still exciting for them to become characters they know and love too. We did this together so they knew what looks were ahead. They’re planners like me!”

Beginning on October 1st, the team was off to the races. Michelle dedicated a corner of her living room to their family project, stacking bin after bin with everything needed for the looks. Michelle lets the girls choose whether they’d like their hair and makeup done first, then they blast music and get to work.

“I have to work quickly and efficiently before they get wiggly and ready to play with something else. My oldest likes to sneak peeks about every ten minutes . She likes to see it all come together. My little one, Ellie, loves to be surprised! She’s super patient and gets so excited for the reveals,” says Michelle.

A look through Michelle’s feed shows photos of characters that, while instantly recognizable among adults, aren’t exactly popular among kids — Captain Spaulding, Mia Wallace, Marilyn Manson — but Lily and Ellie have proven themselves to be actresses as well as models.

“If they know who they are, they start practicing the facial expressions during makeup and hair. But some of the characters they portray, they have no idea who they are, so I give very brief explanations and show them the inspiration picture. I explain what the character was thinking or doing in that moment to help. They really nail it every time!”

The photos have been a massive Halloween hit, and not just on social media. Michelle’s work with Lily and Ellie over the past month has been picked up by outlets ranging from Good Morning America to Tamron Hall. After a dry spell that came with a move from Chicago to Minneapolis, a global pandemic, and homeschooling duties for two young girls, Michelle went from feeling like her “career had to be put on hold” to excited for the chance to make the most of 2020’s novel circumstances.

“I started posting the girls and my work on them literally the day after we went into lockdown,” Michelle says.

“I wanted to keep practicing my craft and with no end in sight with the pandemic, I decided that I needed to be more active on social media. I was so worried this was the end of my career that meant so much to me, and social media offered so many opportunities and support that I didn’t know existed. I really feel more confident now than ever.”

It’s a strange thing, having to trade back-to-back, in-the-flesh clients with the same two little faces, dozens of photos, and an online profile. But Michelle’s story is one of innovation — of not allowing roadblocks to throw a wrench in your passions.

“Each and every one of us has been affected by something so major this year, Michelle says. “Having a creative outlet is so important, especially if you’re spending most of your time inside these days. Have fun with it, there’s no wrong way to express yourself or make art. That’s what makes it so amazing — you can do literally anything! Don’t be too hard on yourself! If you really enjoy art, keep going, keep posting no matter how many likes you get. At least one person is going to enjoy what you’re doing and if it makes them smile too, you’re doing something great!”